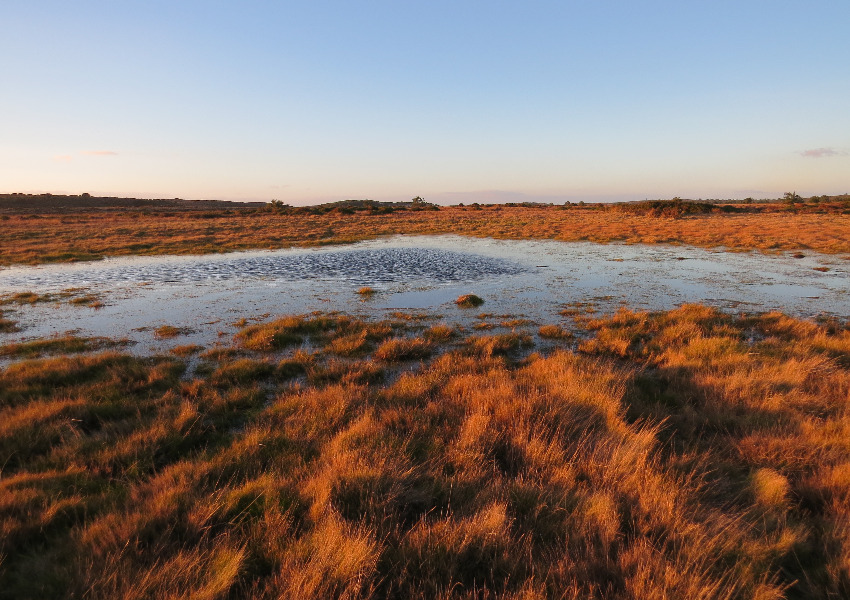 The Liga para a Protecção da Natureza(LPN) today informed the European Commission of the total destruction, on the Southwest Coast, of 5 temporary Mediterranean ponds, priority habitats whose conservation has even been the subject of European funding for more than 5 years. These were the last survivors of one of the most important concentrations of ponds in the country; the others were destroyed a few years ago. The advance of intensive agriculture in this protected area is, once again, at the root of this disaster, which illustrates the progressive degradation of the Southwest Coast, which is home to extraordinary natural treasures found nowhere else in the world.

Within this protected area, classified both as a Natural Park and as Natura 2000 Network, coexists the Mira Hydrographic Development, based on the assumption that agricultural activity is compatible with the natural values existing in the area. The result of inspections and working groups created to evaluate the management of the Park and agricultural activity1, has already pointed out serious failures and non-compliance with legislation, such as lack of monitoring of the quality of groundwater, soil, species and habitats, clearly calling into question any model of sustainable coexistence.

Under the LIFE Charcos Project - coordinated by LPN between 2013 and 2018, and financed by European funds - 133 Mediterranean temporary ponds were identified, considered priority habitats2 in the Southwest Coast Special Area of Conservation. Three years later, it is clear that the investment made and the knowledge acquired about these valuable biodiversity strongholds have not been enough to prevent their destruction. The photographs taken in Vale Figueira in Odemira in June 2018 and in the same area in February 2021 leave no room for doubt: 5 ponds have collapsed under new greenhouses and agricultural crops. And this is just one example.

Aerial photographs showing an example of land use changes between 2018 and 2021 in the Southwest Coast Protected Area where Mediterranean Temporary Ponds used to exist. The area around the ponds marked in the images had in the past several other Mediterranean Temporary Ponds, which were also destroyed in the early 2010s for the installation of greenhouses and irrigated agricultural crops.

In the face of this offense, LPN has made a complaint to the European Commission, demonstrating that its efforts to preserve the Portuguese natural heritage may be at stake due to the ineptitude of the State itself. In protected areas it is not acceptable that priority habitats are destroyed, especially when there are clear obligations in their preservation and management, and commitments are made to society and the European Union. The Southwest Coast is currently without proper monitoring and management, heading towards the progressive elimination of its natural values.

What is happening in this region is also a reflection of the disarticulation between the Ministry of Agriculture and the Ministry of Environment. LPN believes that synergies between these territorial management areas would be beneficial, both for agricultural practices and for nature conservation. Accordingly, LPN, which contributed to the creation of this protected area and has cooperated with the provision of technical and scientific information on this habitat, gathered under funding from the European Commission, made a request for a joint meeting with the two ministries, proposing to contribute to better articulation.

LPN argues that the natural heritage of the Southwest Coast, which belongs to everyone, cannot be eliminated by irresponsible and environmentally, socially and economically unsustainable farms. When the profit of private activities is based on its superimposition over natural and humanitarian values, it is a clear sign that Portugal is moving away from a sustainable socio-economic model that is acceptable in civilizational terms. This is a dramatic evolutionary step backwards that can only be prevented with cooperation and a sense of responsibility.

1IGAMAOT inspection report evaluating the standards applicable to agricultural activities integrated in the Mira irrigation perimeter, provided for in the Management Plan of the PNSACV (16.03.2018).
Mira working group created by dispatch 7675/2018 of August 10.
2Priority habitat of Annex I of the Habitats Directive with code 3170