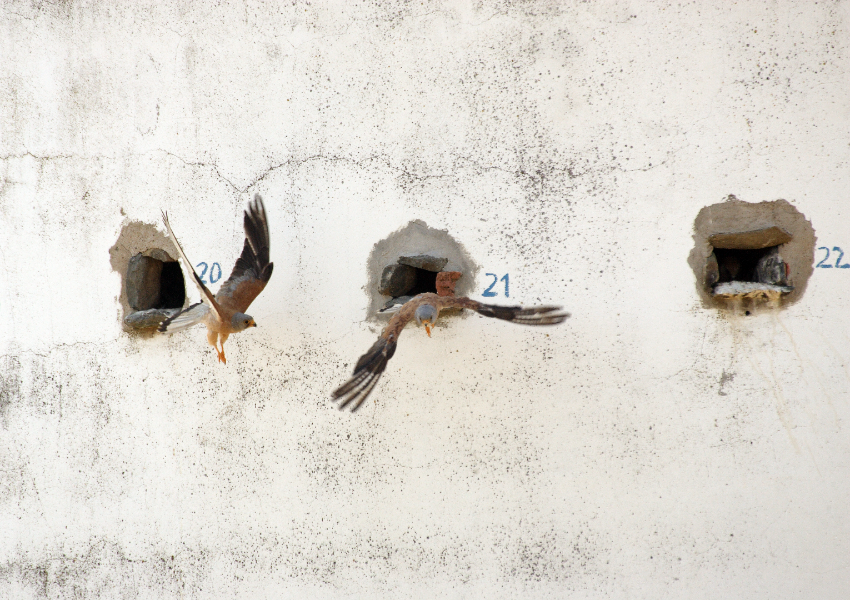 The study conducted on LPN's farm properties recently published in the international journal Parasitology reveals the dynamics of parasitism in mixed colonies.

In Castro Verde, bird colonies congregating different species that depend on similar nesting conditions are common, such as the cavities of abandoned Alentejo hills or the nesting towers built by LPN in recent decades. Some aspects of the dynamics within these colonies remain to be unveiled, such as the load and diversity of parasites they gather. This factor is especially important to know given the impact it can have on the normal development of both offspring and adults, such as the reduction of reproductive success, which may even jeopardize the very continuity of colonies.

A study recently published in an international journal, conducted on LPN's estates in Castro Verde, has now revealed a little more about these parasitic relationships. The researchers tried to answer questions such as the variation in the abundance and diversity of parasites in bird colonies according to their size, the proximity between nests, the richness of bird species that inhabited them and the number of nests of each. More than 250 nests from 30 different mixed colonies were sampled, focusing on four species of birds - kestrel (Falco naumanni), robin (Coracias garrulus), starling (Stunus unicolor) and homing pigeon (Columba livia) - and parasites such as flies, mites and lice.

The study concluded that in mixed bird colonies, species identity is the main factor determining the presence and abundance of parasites. Speaking to cE3c, João Gameiro, first author of the study, states that "in fact, it is the identity of the hosts - whether it is a turtle dove or a pigeon, for example - that most influences the composition of parasites in the nests of these colonies, regardless of how large, dense, or rich they are. In addition, and because of this, the number of pairs or nests of each species becomes the determining factor for the abundance of the Carnus hemapterus fly: a small blood-sucking fly that is very frequent in several bird species and the most common parasite in these colonies." He also adds that "regardless of the size or density of the colony, it will have more parasites if it is dominated by robins, and fewer parasites if the colony is dominated by starlings."

Supporting research has always been one of LPN's goals, as reflected in its objective to "contribute to the dissemination of knowledge produced by the academic and scientific communities". By knowing more and more about the ecology of species and the functioning of ecosystems we can apply measures increasingly directed towards their conservation, so this level of collaboration is extremely important.

The research was conducted in the Alentejo hills and nesting towers built by LPN for the conservation of the avifauna of the Castro Verde Biosphere Reserve, in particular for the recovery of the lesser kestrel (Falco naumanni) population. The study is signed by João Gameiro, PhD student at cE3c - Center for Ecology, Evolution and Environmental Change, Faculty of Science, University of Lisbon, and Jorge Palmeirim, researcher at the same unit and President of the National Board of the Liga para a Protecção da Natureza.

News adapted from the original available at ce3c.ciencias.ulisboa.pt